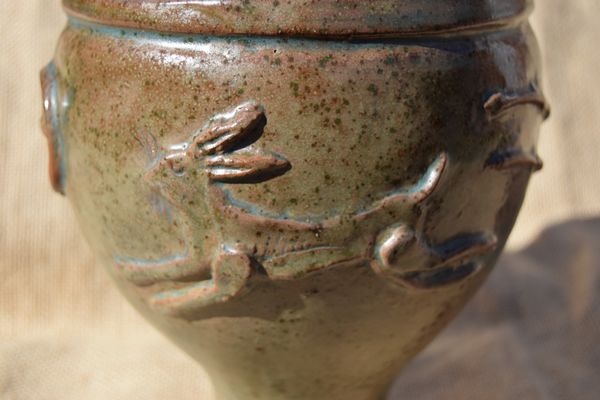 29/08/2019
Last year I was approached by a local archaeological society to produce a replica of a Roman hunt cup. The area where I live– North Nottinghamshire, is rich in Roman archaeology. The road that heads towards Lincoln is dead straight. The river Trent has rich supplies of smooth clay.
There is a lot of interest in local history so the pot is to go on display in the village hall.
I may be a potter but I am not by nature a thrower. I trained as an industrial potter and mould maker and still mainly slip cast my wares, so it was good to work outside of my comfort zone whilst utilising and adapting a few old skills.
Roman hunt cups were valued status symbols, not everyday pots; quality items for influential people. After some research and a chat with a local archaeologist, I felt a little more confident of what I was trying to create. I noticed the term Barbotine kept cropping up, an academics term for what we mud slingers call slip trailing. Some of the Roman ware was also stamped and press moulded. Their production methods and understanding of process were years ahead of our modern ways, on a par with Messrs Wedgwood and Whieldon, cleverly using sprigs and moulding, letting the shrinkage tighten the designs.
I started by throwing a cone. As my throwing is heavy handed I struggled and ended up pinch moulding the shape then roughly throwing it to size. I let it harden off then returned it to the wheel a day later and trimmed it, upside down, with a stem turner. The decoration was then added by sprigging, carving and slip trailing then leaving it to dry very slowly under polythene to prevent the sprigs lifting. A biscuit firing to 1060 shrank the terracotta and tightened up the designs.
So now I was back into my comfort zone. I soaked the pot, soft soaped it and case moulded it with potters plaster, eventually ending up with a four part mould ready for slip casting. The cast pot has tightened up the raised designs and has a different, more modern feel to the original, as I guess was to be expected. Casting slip is smoother than the groggy terracotta I first used.
So far I’ve glazed them with off the shelf decorative glazes to emulate Black burnished ware or “Terra Nigre”, the natural progression could be Terra Sigillatta, “Red Gloss”. 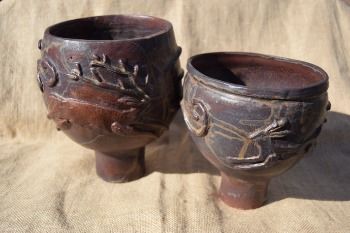